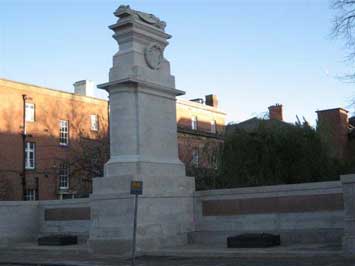 A service of re-dedication took place at the Midland Railway War Memorial on Midland Road, Derby, on 17th December 2010

The memorial, designed by Sir Edwin Lutyens, was originally dedicated on 15 December 1921 “to the memory of the 2,833 brave men of the Midland Railway staff who gave their lives in the Great War.”

In August of this year vandals attacked the memorial, and ripped away two plaques giving the names of the fallen; fortunately the plaques were later recovered. At the time, Council leaders condemned the vandalism as a “deplorable crime”.

Network Rail and the Railway Heritage Trust subsequently funded the restoration of the memorial, which was completed for Remembrance Sunday.

Fiona Taylor, route director for Network Rail, said “It was extremely upsetting that this memorial was targeted by thieves twice in recent history. While we wanted to restore the plaques quickly, it was also important to make sure they were as secure as possible to deter such mindless vandalism in the future.”

Rededication of Midland Railway War Memorial, Derby
Press Release
Andy Savage, executive director of the Railway Heritage Trust, added: “We were greatly saddened when the memorial was attacked, and are proud to have been able to support its restoration”

The original service of dedication was led by the Right Reverend Edward Hoskyns, the then Bishop of Southwell. 89 years later, almost to the day, the Reverend James Lindsay, of the National Rail Chaplaincy, led a service to rededicate the memorial. James chose to use the original Prayer of Dedication from the 1921 service, adding to the moving atmosphere of the event.

The Lord Lieutenant of Derbyshire, Mr Willie Tucker, read from the Roll of Honour, and the Lord Mayor of Derby, Councillor Amar Nath, read the poem “In Flanders Fields” by John McCrae. The service was attended by representatives from the railway industry, railway families, the Royal British Legion and members of Ex-Service Associations.

Rev. James Lindsay added “It was a privilege for all of those involved in this important project. After such an act of desecration the memorial can be used once again by the people of Derby to reflect, contemplate, pray and remember.”