After 12 years in post our Executive Director, Andy Savage, is retiring next spring. If you are interested in taking over this most interesting and challenging job, here is the advertisement. If you want to apply for the post, please make sure that you submit your CV by October 8th, sending it to

Railways in the first half of the 19th Century made the Industrial Revolution possible. They were the agents of a great upheaval in Britain, bringing wealth and new opportunities to agriculture and industry, making it possible to do business across great distances, creating the conditions for cities to grow, allowing remote areas to become vital ports and industrial centres, and employing multitudes of people in steady, reliable employment. The railways were the largest agents of economic and social changes in those times. The mobility they gave to the British people has never been lost. Although such a continuous and major upheaval did not find favour with all – the gentry were nervous of how access to travel raised the aspirations of ordinary folk and the romantics, like Wordsworth objected to the changes – the contribution the railways made to life in Britain was huge.

150 years later, there has been significant change, and we are experiencing the Electronic Revolution. These changes seemed to be outmoding the railways at first, but now the demand for rail transport has begun to swell again. High speed city to city passenger use is now higher than the levels of the ‘golden years’ of the railways, and the energy efficient nature of rail encourages the belief that the relevance of railways will continue to grow in the future. During those 150 years there has been much change, and some of the important and iconic items from the past have been allowed to disappear.

However, in 1985 British Rail set up the Railway Heritage Trust as an independent company, to assist the operational railway in its preservation and upkeep of listed buildings and structures, and to facilitate the transfer of non-operational premises and structures to outside bodies willing to undertake their preservation. This was so that valuable railway items could remain with us and be looked after, both when they are still in use and when change has removed their operational utility.

Upon the privatisation of the railways, the Railway Heritage Trust was maintained, and Network Rail and the Highways England (Historical Railways Estate) now sponsor the work it does. The job of safeguarding the assets, passed down to us all those years ago, is carried out with enthusiasm by the Trust, working with individuals, main line and heritage railways, conservation bodies, local and central government, and anyone else involved in the job of keeping past, present and future in harmony.

On this web site you will find details about how the Trust works, who its Directors and Officers are, what is in and out of scope for the Trust and how to apply for a grant from it. You can also find the most recent Annual Reports, which show the projects the Railway Heritage Trust has most recently undertaken and give its financial results; finally there are the answers to some frequently asked questions about the Trust.

We are now permanently working from home, and still accessing emails and handling phone calls in the normal way. We can offer, award and pay grants as normal, and as well as taking part in virtual meetings, we can now carry out site visits. We are only able to access physical letters at our office address from time to time, therefore the best way to contact us remains via email at
rht@railwayheritagetrust.co.uk 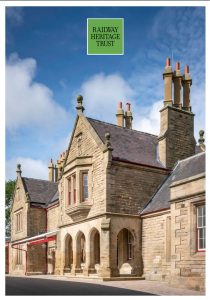